I walked out into the backyard this evening with Elise’s laptop. I opened NetStumbler and found 16 wireless networks. Wow.

Every once in a while I’ll like to go back and read entries that I’ve posted on Janicek.com. I’ll think: “I wonder what I was doing this time last year.” I’m glad I do this on occasion because my memory isn’t getting any better as I grow older. That and I don’t remember things like I used to.

Although I have a little over a year left until I turn 30, my memory isn’t what it used to be. It’s because of this that I like to revisit entries on Janicek.com.

This time last year I ate curried squid. I decided (again) that I don’t like SprintPCS. John and Christine bought their first house in Austin. I tested for my first star. I was reminded for the 28th time that I don’t like cold weather. I was also reminded that I’ve been with my current employer for 2 years now. It’s funny to think about how just over two years ago I was working in the corporate/cubicle environment and absolutely hated getting out of bed every morning. I don’t miss that.

Having said that I’m now going to tempt fate: Life’s not too bad. 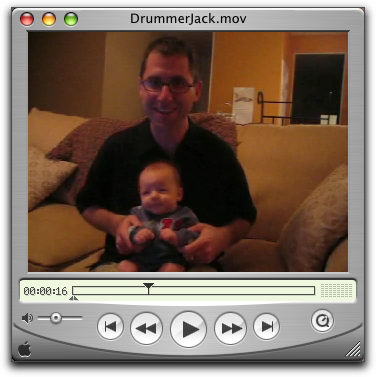 Here’s a funny movie of yours truly giving Jack his first drum lesson.

Yesterday was one the best days of my entire life. For my birthday last year Elise gave me a gift certificate for a cooking class taught by Jeff Blank, Chef-Owner and Robert Rhodes, Executive Chef of Hudson’s on the Bend. I cashed in on said gift certificate yesterday. That class was so much fun that I don’t think I could find words to describe it.

There was a group of approximately 40 of us who arrived at Jeff’s house at 11 a.m. Talk about a gorgeous house – nestled atop a hill overlooking Lake Travis. We were served wine from the outside bar as we waited for the class to begin.

The class was held in what I would guess was Jeff’s “teaching kitchen“. We watched and learned to make the following four couse meal:

We were able to sample the quail and backstrap after they were cooked. I immediately decided that I was going to buy a stove top smoker. I called Elise before the class left for the restaurant for lunch and told her how wonderful the class was and that I was going to buy a smoker. She told me not to because she had already planned on getting one for my birthday. I don’t know if I can wait 9 more days!

The class was VERY informative. It was great to learn techniques from a master. I was truly awestruck and found it fascinating how chefs combine such a high level of art and science. I’m not quite to the point where I consider Omega 3 fatty acids and complex protein strands in my day-to-day culinary endeavors.

I choked up a couple times during the class (seriously) – I sat there and thought to myself “this is one of those life experiences that I will never forget.”

Anyhow – I guess it goes without saying that the food was excellent. What’s interesting is that the ingredients that were used aren’t uncommon in my own, or anybody’s kitchen. Well, aside from veal stock.

What’s also interesting (and pissing me off) is Executive Chef Robert Rhodes has to be the same age as me, if not younger. He graduated at the top of his class from the Culinary Institute of America and is leaving Hudson’s later this year to be a chef at the White House! I was going to offer my resume but thought these guys might catch on to my using Orville Redenbacher and Betty Crocker as references.

The late lunch was fantastic. Every course was cooked to perfection. If I had to pick a favorite course, it would be the venison (duh). I was full after the chili but ate every last morsel of every single course. I’m not big on desserts but cleared my ancho pecan pie and ice cream plate as well. I gained a lot of weight yesterday but it was soooooo worth it. I’m hoping to take one of Jeff’s classes at least once a year.

Jeff and Robert visited every table during lunch. I didn’t get a chance to talk to either of them but would have loved to have said thanks. So instead I went home and thanked Elise again for the gift certificate and told her how great the class was. I flopped down on the couch, fell asleep and haven’t eaten anything since yesterday’s lunch. I’m still full.

So, if you’re in the Austin area, you’d be missing out if you didn’t attend a Hudson’s on the Bend cooking class.

I received my property tax receipt in the mail today. If that’s not justifaction to procreate, I don’t know what is.

So we’ll have a child. I would assume this would happen in a hospital. My tax dollars went to the Hospital District. Then we’ll send mini me to school. A LOT of our money went there. Then mini me will become a juvenile delinquent. He’ll go to a correctional facility (that we’re paying for handsomely). He’ll whittle a knife out of a bar of soap, stab his cellmate and then be transported to the higher security county facility. Might as well… I paid for it. He’ll eventually be rehabilitated at the age of 38. It will be then that we can proudly send him passing through the ivory towers of the university – er, the community college. We paid for it.

Life is starting to make a lot of sense now.

I was getting ready to go to work yesterday. I walked to my truck and noticed that I had four quarts of used oil in the bed of my truck from when I changed my oil last week. I decided that I didn’t want old quarts of oil in my truck, so I took them, along with the old oil filter and walked them to the garage. In doing so, I spilled oil all over the floor of the garage.

I used the rest of my gasoline from our gas containers to wipe up the spilled oil. I put the gas cans in the back of my truck so I could fill them when I stopped to get gas on the way to work.

I went to work. After work, I went to Tae Kwon Do. When I leave Tae Kwon Do, I always keep my dobok on while driving home. I got home, got out of the truck and grabbed my two gas cans. Just as I grabbed the two bright red gas cans, my neighbor pulled into his driveway. Both of my hands were occupied carrying gas cans. I lifted one of my arms in a waving gesture to greet my neighbor (who happens to be a black man). It was then that I realized what it looked like I was doing. I laughed at myself and went inside.

John and Christine came over tonight for the first time since Jack was born. I was laughing (at myself, by myself – as usual) the other day when I was recounting the day that Jack was born. I left work early because I knew that Elise and I would be going to the hospital that afternoon. I pulled onto the street that enters our subdivision. I decided to pull over and check the mail (we have one of those community mailbox centers). I opened our mailbox to find the mail and a key. The key was for one of the larger mailboxes that the postal service uses should you receive a large package via the USPS.

Just as I grabbed the key, my cell phone rang. It was John. He said “Dude, I have a boy!” It was at that point that I was filtering my mail. One hand held mail. The other hand held junk mail. My shoulder was holding my cell phone against my ear. I went to throw away the junk mail and accidentally threw the mail key into the trash. I was trying to maintain some sort of enthusiasm while hearing the news of my nephew’s birth while juggling two handfuls of mail and digging through the trash while other residents of the neighborhood were stopping to get their mail.

I was just reminded of that and thought it was funny.

I’m a huge advocate of preventing malicious software that can be installed on a Windows computer without users’ knowledge. I urge friends and family to use Firefox as their web browser, Thunderbird as their e-mail client or to purchase a Macintosh.

I’ve become well versed in scanning and removing malicious software by means of Ad-Aware and Spybot-S&D.

When Microsoft released its Beta AntiSpyware software, I downloaded it. It crashed. Go figure. I stumbled upon this picture when messing around with Hello and Picasa: The Notorious VIC with Quentin Tarantino